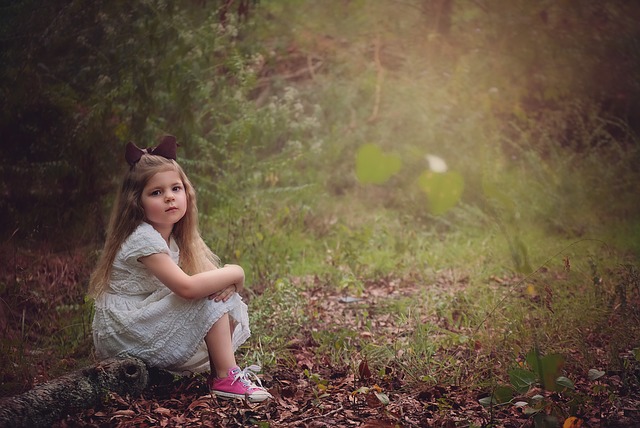 I remember sitting in a seminar in 1998 when the facilitator asked the class to describe a 2 year-old. She started frantically writing on the board as we called out words such as:

You get the idea. Next she asked us to describe an adult. We were just as quick with the responses and the answers were like:

Again, you get the idea. The facilitator then asked us “Which list looks more ‘grown-up’? Which list looks happier? Which list do we want to be more like?” The concept being presented was that we are born with an innate sense of wonder, to give of ourselves to understand everything around us. But as we get older, we get hurt so we build up our defense mechanisms. We experience sadness and disappointment so we limit our exposure. We seek approval even to the point of pretending we’re something we’re not. It’s the normal thing to do. Adults act “normal” while a 2 year-old acts “natural”.

This was no more apparent to me than the interchange I had with a 3 year-old in the store yesterday. Actually, she was 3 and a HALF, that half a year being so meaningful at that age. She came into the store with her grandmother, a regular customer that I have become friends with over the 15 years or so I have worked there. This was the first time I had met Mackenzie. Though not the girl pictured with this post, she had long blond hair pulled to the sides in flowing pig-tails. She had the most beautiful green eyes and acknowledged that she was often told how pretty they were. She wore a pink leotard, not standard fare for shopping at a resale shop!

I happened to be near the front door when they entered, Mackenzie and her grandmother, Mimi. I was the first one she noticed when entering, looked at me and practically yelled “HI!” I had no choice but to give a hearty hello in return. When I asked her if she had just gone to dance class she informed me not only that she had just gone, described all of the new moves she had just learned, along with what I’m sure were the proper technical terms for them, she proceeded to demonstrate most of them for my enjoyment. I asked for a ‘high-5’ and she marched right over and slapped a solid high-5 on my palm.

Mackenzie and Mimi continued their shopping as I continued working in my space. Of course, working my space always seems to include multiple trips to the back for cleaning supplies, ladders, tools and the such, so I was mobile around the shop. It seemed every time I turned a corner there was a boisterous “HI!” coming from the cute little 3 (and a HALF) year-old. She would remark “I see you, again!” and just giggle, so happy to have found a new friend. It was a few minutes later when I saw them coming out of the restroom. Mackenzie looked at me and exclaimed “I went potty! I peed and I pooped!” The positive reinforcement she was receiving at home was surely working. They resumed their shopping and Mackenzie was always on the look-out, ready for an excited “HI!” every time she saw me.

As they made their way back toward the front of the store and close to the check-out counter, Mackenzie walked over to me and said “You look like Santa!” I assured her that I wasn’t but that I knew him. She told me about the vanity he brought to her last Christmas, blue and purple with Elsa and Anna on it. With Mimi standing close by, I knelt down and asked Mackenzie if I could have a hug. She skipped over to my arms and gave me the biggest hug I have ever received from a 3 year-old. I jokingly asked if she would just come home with me and she practically bubbled “Sure!” I laughed, and about that time another customer walked in the front door and set off the chime. Her startled look turned into a giggle and she asked “What was that?” I took her over to the door and showed her how the mechanical chime worked and she laughed even harder.

About 15 minutes later, my wife came over and said she was done with what she needed to do and we could leave. Turning around, I saw Mackenzie and asked for one more hug. She jumped into my arms so I could pick her up and we exchanged a wonderful hug. I looked at her and said “Mackenzie, I have to go home now.” She looked at my wife and said “I’m coming, too! Can Mimi come, too?” We all had a great laugh but my wife explained that Mackenzie’s parents would surely be sad if she didn’t come home. She agreed but asked if she could come over some other time. The ladies working behind the counter as well as the customers lined up to check out were all in smiles. One of them said “Watching that interaction just made my whole day!”

This girl was living life naturally. She was inquisitive. She was vocal. She was trusting. She was loving. She celebrated her victories and didn’t care who noticed. I want to be more like her.