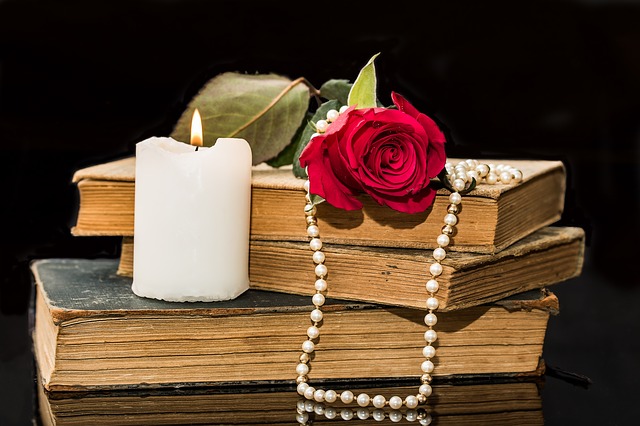 I remember you! Couldn’t you see I was in a deep meditation when you so selfishly interrupted my peace? So, apparently, these many years later, you’re still intrigued by what you saw. I’ll try to explain.

I was born in Atlanta, Georgia in 1956. This time. My great-grandmother passed away when I was about 5, or maybe 6. As the family was going through her personal belongings, evidently, I found the string of pearls on her dresser and enjoyed playing with them. I would put them around my neck, double them up and wear them as a bracelet, but most of all I would just rub them between my fingers. My Mom asked if she (we) could keep the string of pearls as a family memento. Being the eldest grandchild and seeing how much I liked the pearls, everyone agreed she should take them.

Going through the old family pictures, there was one that had carefully been placed in an ornate sterling silver frame. Of course, in the early 60’s, sterling silver did not have the value that it does now. But what struck most everyone there was how much I looked like the young lad in the picture. My grandmother insisted that Mom take that as well. Nobody knew who the little boy was in the picture but my Mom cherished it.

Also in Granny’s bedroom was an old cedar chest, filled to the very top with quilts and quilt tops. My great-grandmother had been a prolific sewer (that would be “one who sews”) as was common in those days, making clothes for all the children, as well as most of her dresses and my great-grandfather’s shirts. Left over fabric never went to waste, going into the scrap bag and eventually winding up in one of Granny’s quilts. After all of the children and grandchildren had taken their choice of quilts, there were still a couple left in the chest. I was told I could choose one and I picked the one that was still neatly folded up, made of fabric in mostly blue tones, but quite ragged and tattered around the edges.

Years went by, my education completed, and I eventually left home to start a life of my own. After I settled in to my first apartment, Mom gave me a couple of boxes to “get me started”. In the first of the boxes were some old pots and pans she didn’t use anymore along with a few dishes and eating utensils. There was even a fresh roll of toilet paper! The other, smaller box was sealed and was labelled simply “For Glenn”. Carefully cutting the tape with a box knife, I found the quilt, the silver framed picture, and the string of pearls.

My bedroom was furnished primarily with thrift store purchases though I had splurged on a new set of box springs and mattress. I set the picture and string of pearls on the left front corner of my dresser, a link back to family passed. As I took the quilt from the box, still folded as it was the day I picked it out from Granny’s cedar chest, and went to spread it across the foot of my bed, a small leather-bound book fell out. It was a diary. I found a name inside the front cover – Harriett Stone. I later learned that she was Granny’s great-grandmother, just as Granny was to me.

The diary had detailed descriptions of life around the family farm in Philadelphia, on land midway between the Schuylkill and Delaware Rivers. Later research found that the farm, along with those around it had been purchased in the 1860’s for the future home of City Hall. From old plat maps I was able to view during my visit to the Pennsylvania archives building, I was able to find the old Stone family farm, including the layout of the homestead. From the descriptions in the diary, I knew that Harriett’s dedicated space in the two-room house was in the front left corner. When I overlaid the current map on top of the old map, where you saw me sitting cross-legged on the sidewalk would have been right where she slept every night.

During the late 1990’s, I found I was getting more in touch with my intuition. Just sitting and holding one of the items from Granny’s house while meditating seemed to transport me back in time. I could see the farm. I could see Harriett playing in the grassy fields. I could see the weather scarred siding on the house. In 2005, I knew what I had to do. Standing on the very spot where Harriett had spent her childhood, I lit a bundle of sage to clear the air. That may have been what you thought was cigarette smoke. I sat down cross-legged and laid the items from my family passed in front of me. I closed my eyes, focused on my breathing while rubbing the pearls between my thumb and forefinger, and was instantly transported back to Philadelphia, mid – 1830’s.

There was the house but there was no activity outside. There were a couple of horse-drawn buggies parked outside. As I peered into the home, I could see a gathering of people over in the far corner, near the fireplace. Harriett was over in her corner, sitting in a small rocker, clutching a hand-made doll, tears streaming down her face. I heard her father tell someone in the group “I found him in the pond. He must have fallen in.”  As I looked to see what the small crowd was viewing, I saw him. The body of a young boy lying lifeless on the old feather mattress. The boy from the picture. The picture of me from a life lived before.

It was then I heard “Hello, are you Glenn?”, startling me from my meditative journey. Looking up I saw you – an angel, with hair of gold, and eyes of blue, Harriett had come to comfort me once again.